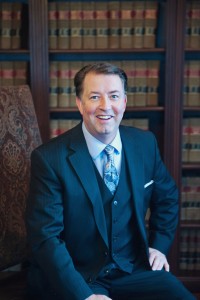 Ron Wilkinson graduated cum laude from Brigham Young University with a Bachelor of Arts degree in Speech Communication and Rhetoric. He was a nationally ranked collegiate debater and speaker. He attended the J. Reuben Clark Law School and graduated in 1989. While in law school, Mr. Wilkinson participated in Moot Court and received many awards, including “Best Oralist” at the Jerome Prince National Moot Court Competition, sponsored by Brooklyn Law School Honor Society. Mr. Wilkinson later completed all coursework for a Ph.D. in Clinical Psychology, receiving training in Forensic Psychology, including the performance of custody evaluations, the performance of fitness evaluations, and multiple modalities of therapy.

Mr. Wilkinson also serves as a court-appointed Special Master in high conflict cases and is also a trained Guardian ad Litem. For over eight years, he practiced in the Fourth District Office of the Guardian ad Litem, including Managing Attorney for six years. Because of Mr. Wilkinson’s unique background in psychology, including therapy and custody evaluations, he provides skills that successfully assist the client with issues in a complicated divorce.

Mr. Wilkinson has been equally successful in appellate work. On the appellate level, he has assisted in the reversal of awards of child custody and reversal in favor of grandparent visitation. In addition, Mr. Wilkinson effectively prevailed in an appellate appeal that involved a wrongful death claim against a municipality.

Mr. Wilkinson is a member of the Utah State Bar and admitted to practice in the United States Supreme Court Bar. He was a member of the Utah Foster Parent Association, the Juvenile Detention Advisory Board, and the National Association of Court Appointed Special Advocates. He served as a chairman for the Children’s Justice Center Advisory Board and was on the Task Force for the implementation of House Bill 265, Child Welfare Reform Bill. Additionally, Mr. Wilkinson has received the Child Advocate Award, and the Utah County Domestic Violence Coalition Purple Ribbon Award. Mr. Wilkinson has had articles accepted for publication, and Mr. Wilkinson has given multiple presentations to attorneys, therapists, and custody evaluators.

In addition to his law practice, Mr. Wilkinson currently teaches Public Speaking at Brigham Young University and has also taught in the departments of Social Work and Psychology, including Abnormal Psychology, Adult Development, Life Span Development, and Child Development.

Mr. Wilkinson and his wife are the parents of eleven children. He enjoys skiing, racquetball, gardening, and spending time with his family.